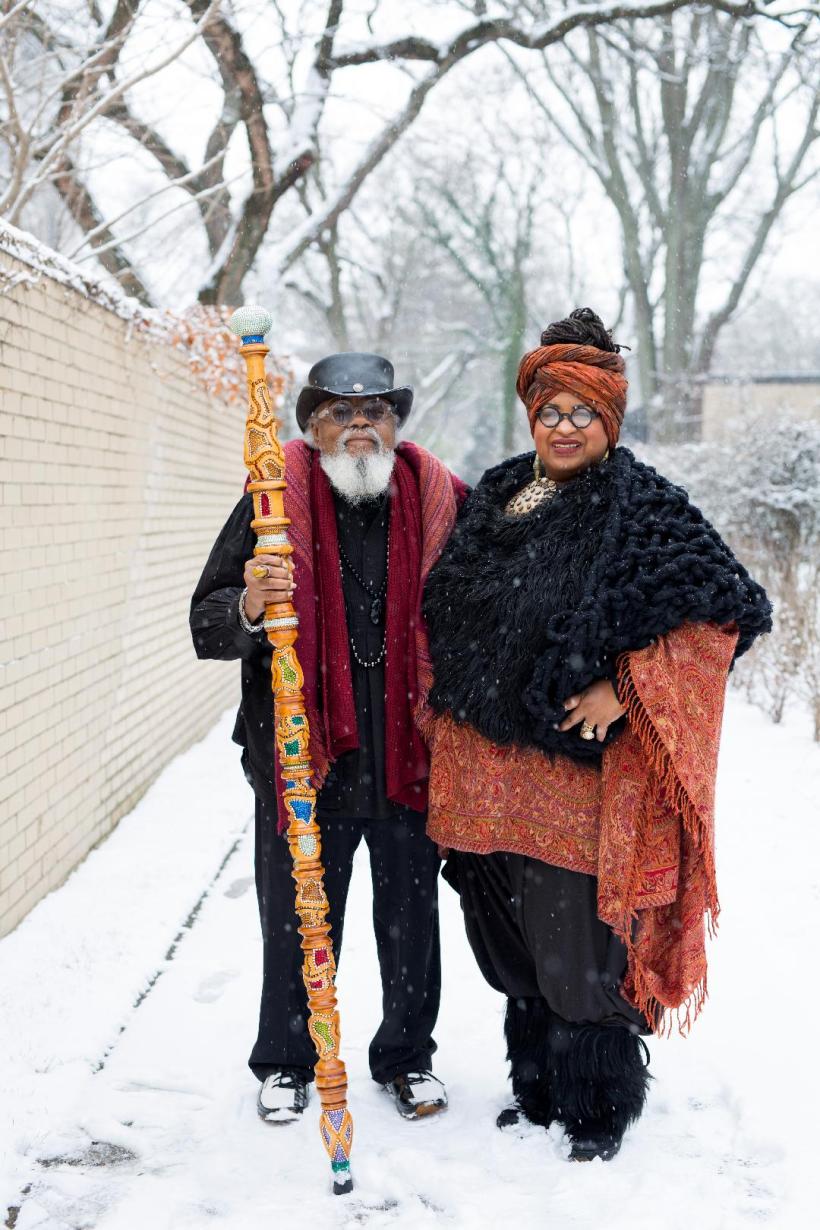 Posted to David Philpot’s website, on the one year anniversary of his passing, by Marsha Music.

Ari Seth Cohen, creator of the Advanced Style series of blogs and books, asked me, at the start of 2018, to write a piece to accompany the photos that he had taken, at the end of 2017, of me and David Philpot; for his newest book, Advanced Love.

It was cold and snowy the day that Ari arrived in Detroit, and Philpot was not feeling well. He was, nevertheless, a great trooper, and was delighted to be photographed all afternoon at our home in Lafayette Park, Detroit. Here is what I wrote, not knowing that his end was nigh……..

Much has been written about love in the elder years, its surprising

exhilaration and amorous vigor. Yet, senior love must maneuver

through mazes of lifetime’s complexities: decades of relationships with exes, children, old friends; labyrinthine webs of property and inheritance; or dwindling resources to provide comfort in the elderyears.

It is love that has survived loss, with no youthful illusions of invincibility: it is also frailty and diminishment, doctors and meds, pain and suffering, even when dressed to the nines.

I met my husband, artist David Philpot, at a 2011 exhibit of hiswork; he had come from Chicago for a show at the N’Namdi Center for Contemporary Art, where I live, in Detroit. I wore an ethnic textile, crossed over an ankle-length black dress, and a necklace of white coral, jade, and carnelian, with Tibetan seals as pendants. I turned a corner to see Philpot’s art—six-foot-tall staffs of bas-relief carving, ornamented with jewels, shells, and Swarovski crystals. He also creates cows and furnishings embellished with watches and clocks.

I was agog and turned to the artist; he sat next to his work, plain and homespun, in too-large clothes. I later learned that he had emerged from five years of grieving widowhood, after forty-five years of beloved marriage.

He had a white beatd and uncut hair and, on his head, an old-fashioned Borsalino bowler. he looked like a fairy-tale woodcutter, and he leaned on an ornate cane, a mini-verson of his resplendent staffs. Sweetness emanated from him like cotton candy.

I was curious—what matter of man is this who looks so simple, yet conjures these splendiferous things? He stood and gazed—not at me, but at my necklace. He reached for it before he looked up at my face, as if startled, and said,

“You are gorgeous! Are you married? May I kiss your hand?”

He was interesting, but I was not attracted—and he was thirteen years older than me. Twice married, I was five years divorced from tall, dark, and disastrous, and not ready to leap again. After the show’s opening day, I laughed at the efforts of the gallery owner, George N’Namdi, to matchmake us into a couple. But despite my scoffing, happen it did, and like a sparkling druzy in a solid rock, Philpot returned to Detroit, courting me with a quiet, gallant bravado—tipping waiters with gold coins, gifting me with a truckload of plenty from his travels abroad—on our first date.

At the UniverSoul Circus, his sweet heart captured me. He proposed on bended knee, in front of my church’s congregation five months later. We wed in February 2012, after an eight-month, mostly telephone courtship. Me, in a Senegalese gown embroidered in gold, with a veil I clipped from the lace of a thrift-store wedding gown. He, in a regal black African grand boubou, embroidered in red. We carried his magnificent staffs down the aisle.

As we meshed into a couple, Philpot allowed me to cultivate his look; he surprised himself with his newfound sartorial zeal, and became adept at the perfect swash of pashmina scarf. I bought a steampunk hat which became the quintessential element of his funky, artisanal style.

I come from a family of dressing women, ladies of church modesty and élan; I am a lifelong student of style, in a city of Black sophistication, with the challenges of an ever-fuller figure and progressing time. Though it seemed that it was Philpot who was changing, becoming

the other half of a walking installation has inspired me to revel in my love of dressing—an authentic art practice. Today, we share scarves,

bicker over beads, and wear the same scent. We have been painted, photographed, and variously rendered as exemplars of creative Detroit style—and, as Philpot has had serious challenges, we carry on, through sickness and in health. For ours is a love that lives in the valley of the shadow—yet transcends darkness for the living light; a love of not just the other, but of our whole advancing life.

David Philpot passed away within months of this writing and photo shoot, on June 28, 2018. He has been posthumously honored – including the prestigious Alain Locke Award of the Friends of African and African American Art of the Detroit Institute of Arts. He is fondly remembered as a husband, father, member of the Chicago and Detroit creative communities – and a great artist. 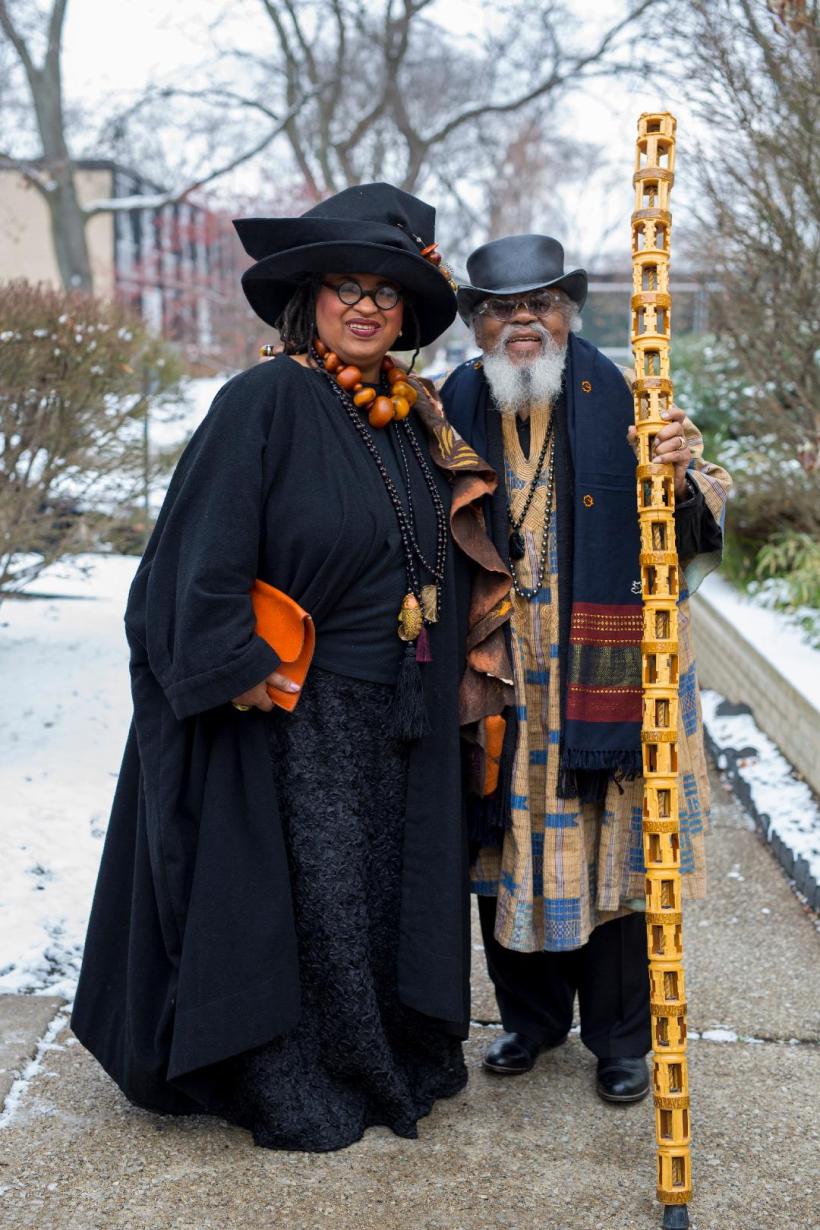