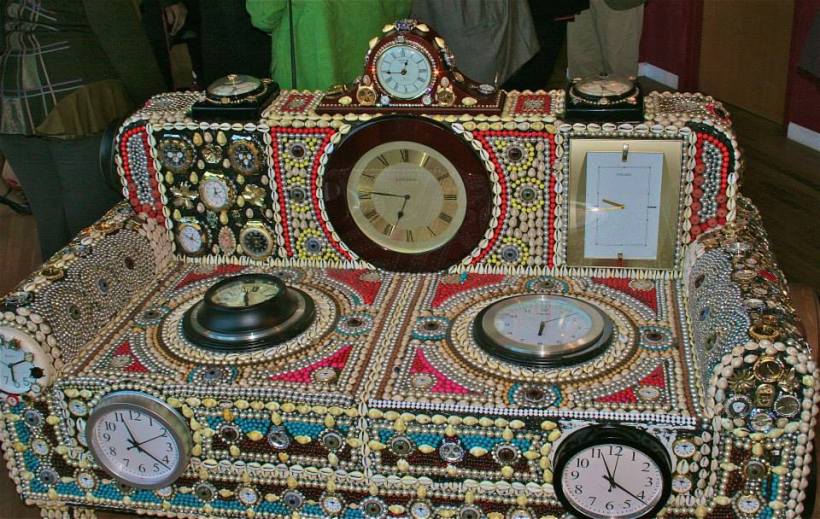 David Philpot, artist – a master staff carver, mosaic and collage master – was born in 1940 in Chicago, Illinois. He is an accomplished artist, renowned in “outsider” or ”folk” art circles. 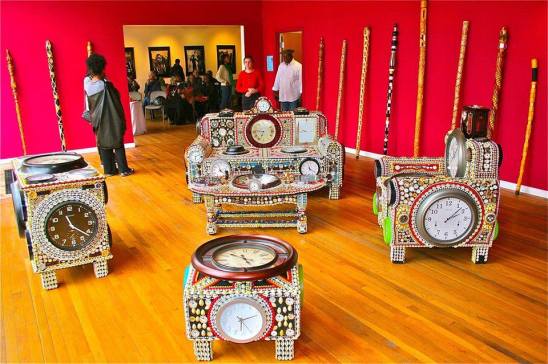 “Outside artist” and “folk artist” are categories that he has embraced, challenged and transcended long ago; his work has been hailed, housed, and exhibited in many prestigious galleries, important collections, and major museums of international fine arts. 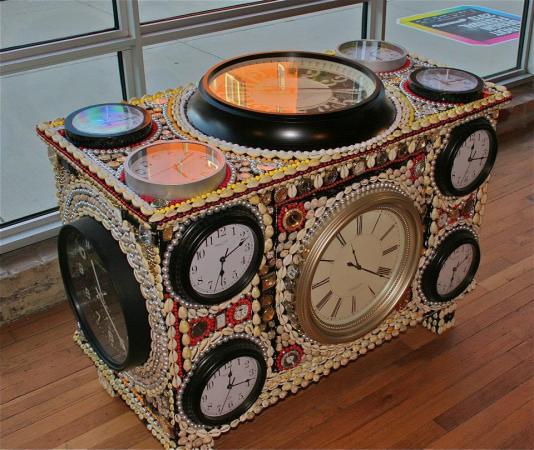 They are intricately carved and often embellished with beads, shells, faux jewels, mirrors and found objects.

He also creates ornamental collage installations; furnishings embellished with intricate mosaics of watches and clocks, and has created a massive 12-foot high PCV-pipe – adorned with beads and cowry shells.

For the famous 1999 Chicago city arts “Cows” campaign, he created a life-sized cow adorned with thousands of gold beads, buttons and shells – and covered in Swarovsky crytals. It was won (by Oprah Winfrey) at auction as a fundraiser for Intuit, a Chicago non-profit arts gallery.

Here’s a close-up, below, of a later work – with authentic gilding, taxidermy eyes and Swarovsky crystals.

Philpot (as he is known) grew up poor and fatherless in a challenging environment on the Southside of Chicago. He has a stammer, which made him the brunt of ridicule while growing up. Later, he returned from four years of Vietnam War-era service, in West Berlin Germany, to help care for his four younger sisters; he married, and then worked for 17 years as a taxi mechanic.

He had no artistic leanings as a child, but “always loved the feeling of wood”, and carried a stick throughout the neighborhood. He began his work as an artist in 1971, when at age 31, he was inspired to make a staff – after seeing the story of Moses in the movie, The Ten Commandments. He prayed to God to learn how to make one. 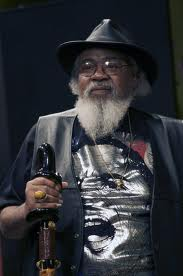 Philpot with Genesis, his first staff 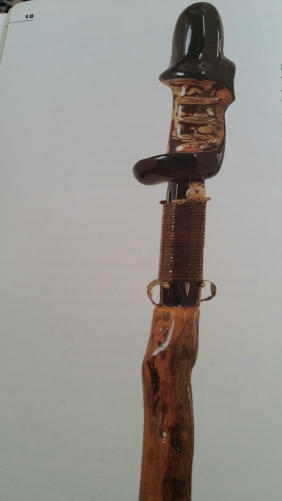 Shortly thereafter “a voice” told him to cut down a branch of an “alley tree” in the projects where he lived, and he made his first staff – with a leather Samorai-like scabbard, and a formed, resin handle, that he called “Genesis.”

In the Biblical story, Moses is described as being “halt of speech”, which resonated with Philpot because of his speech impediment.

After seeing fancy canes in a tobacco shop window, he decided to try his hand at cane carving – but soon determined that there were many canes on the market but few staffs. He says “I told God I wanted to learn to carve staffs.”

It took him a year to carve and he carried it – in varied stages of completeness – wherever he went.

Since then he has worked almost exclusively with the Ailanthus altissimus, known variously as the Tree of Heaven, Chinese Sumac, Alley Tree, Stink Tree or Ghetto Palm.

He found this hearty, abundant tree perfect for his staffs, due to its straight lines and prolific growth in urban areas (thus the subject of the classic book “A Tree Grows In Brooklyn”). He made staffs for ten years but never exhibited until 1981, when he immediately received prestigious acknowledgements and “best of show” awards. 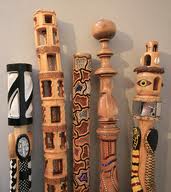 Despite economic privation and job loss during his early career, and a heart attack in the late 80’s, his work exploded on the art world and gained a significant following.

He exhibited and sold extensively and had long relationships with prestigious Chicago galleries including Intuit (Intuitive and Outsider Artists), the Judy Saslow Gallery and the Carl Hammer Gallery. Later, his work was in the N’Namdi Gallery, in Detroit.

In 1997, Philpot received a Chicago sister-city grant to study indigenous carving in Accra, Ghana. As a result of this program, one of Philpot’s staffs was presented to the Ashanti king in Kumasi, Ghana and became a part of his royal collection, placed next to the throne.

During Philpot’s visit to Ghana, the American Ambassador to Senegal, West Africa invited Philpot to Dakar Senegal, where three of Philpot’s staffs became a part of the official U.S. State Department Art in Embassies collection loaned to Senegal for three years.

His staffs were loaned by the U.S. government for exhibition in the American Embassies in Cairo, Egypt; Swaziland, South Africa; and Dakar, Senegal.

In Chicago, the late Mayor Richard Daley and his wife, the late Maggie Daley, were avid supporters of Philpot’s work, and they displayed images of Philpot’s collage installations on their official holiday greeting cards. 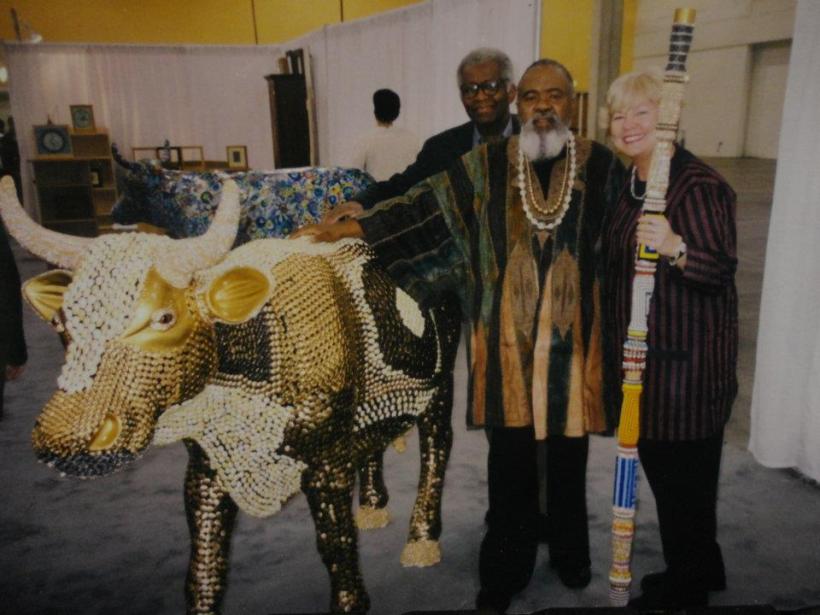 In 1996, Philpot was Artist in Residence for a month as a part of the Greenwich and Docklands International Festival in London, England, where he exhibited and taught classes at The Royal Arsenal.

While in England, conducted seminars on staff-carving – and while there, took his staffs to Paris, where they were acclaimed. Philpot was honored with an event held in his honor on the legendary ship, the Cutty Sark.

Philpot, father of three adult children, David Jr., David Nicholas and Nicole, was always accompanied by his beloved wife Jean, who passed away in 2007. Below, in Paris:

During his trip to France, in the airport, Philpot was startled when he heard someone yell, “Mr. Philpot,” thinking “who in the world would know me here??” Young man above ran up to him – he had been one of Philpot’s students in a seminar that Philpot had taught the year before, at an exhibition of his work at the Dallas Museum of Art. The young man was on a class trip in Paris a year later, when he saw Philpot. 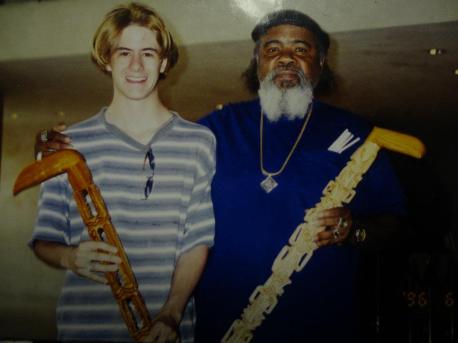 Philpot – entirely self-taught – has taught thousands of students, in public and private, urban and suburban schools, universities and community centers. 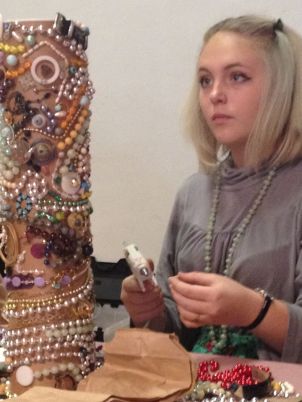 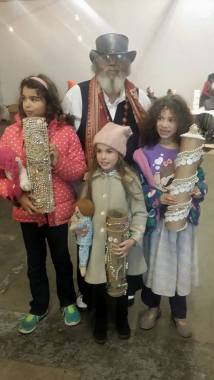 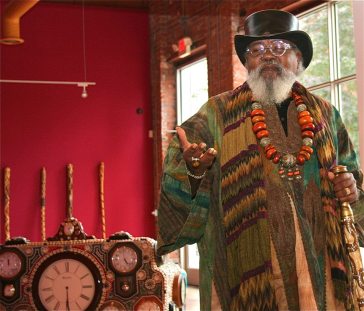 In the video below, kids with cardboard tube staffs created in his classes.

Philpot has been the keynote speaker at many programs in Illinois and Wisconsin; in 1999, he and Native American singer-activist Buffy St. Marie were co-lead speakers at the annual Michigan Arts Education Conference in Sault St. Marie. Following that engagement, Philpot lectured and demonstrated his work at the Detroit Institute of Arts. 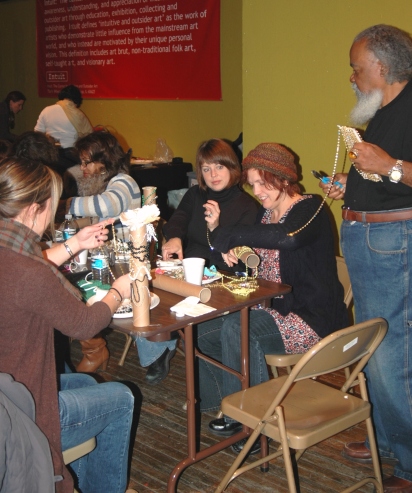 Philpot’s staffs are a part of many important permanent collections, including the Du Sable Museum, the Harold Washington Library, AT&T Headquarters, Illinois State Museum, Carbondale Museum and the Anacostia Community Museum of the Smithsonian, in Washington D.C. Below, on the runway of Fast Fest Detroit.

His work was part of influential “Black Arts-Ancestral Legacy” exhibit at the Dallas Museum, which began in 1989 and toured the U.S. for over two years. Below, his exhibition at the N’Namdi Center of Contemporary Arts, in Detroit.

Philpot’s work has been collected by arts enthusiasts world-wide.

A Philpot staff was featured in the ground-breaking Absolut Vodka ad series with artists such as Andy Warhol and Keith Haring, as well as ads for Seagrams and other national campaigns. 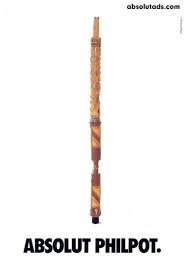 During his career, Philpot has been an esteemed colleague to other significant “outsider” artists such as “Mr. Imagination” (the late Gregory Warmack), below left, a master of found object works, and artist, the late Milton Meisenberg, below center, a chainsaw artist who makes art from trees and wood. 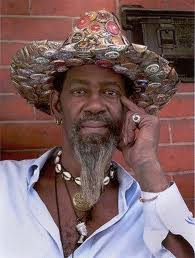 Philpot has been extensively profiled and his works have appeared in books and periodicals too numerous to list here; his work is in the center of the cover of this book by Tom Patterson. He has been a subject of several Public Television documentaries. 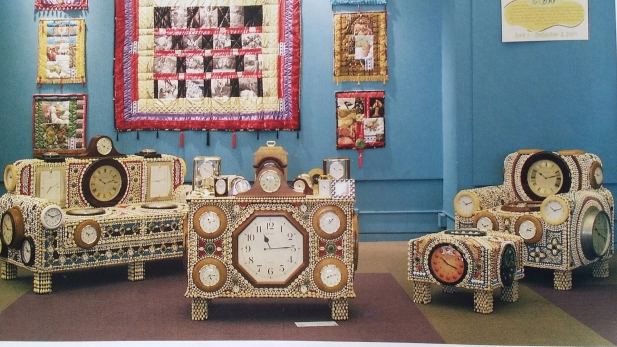 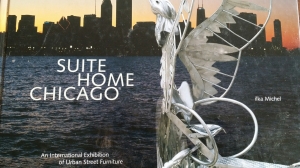 Philpot’s beloved wife of 45 years, Jean, passed away; and in deep mourning, he left the arts for almost 5 years. In 2011, George N’Namdi, owner of the N’Namdi Center For Contemporary Arts, invited Philpot to Detroit to participate in a multi-artist exhibition called “Homeland”. Philpot, emerging from depression, agreed. 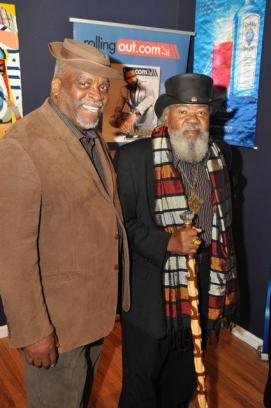 At that show he met Detroit writer, Marsha Music, below left when they met.

In 2012 – they married, and Philpot moved to Detroit. At the wedding, he carried the Swarovsky staff, and she carried a staff that he completed for her, in lieu of flowers.

As befitting an artist of his stature, Philpot has become a distinguished figure in Detroit’s flourishing creative community, with his ever-present staffs, canes or walking sticks. 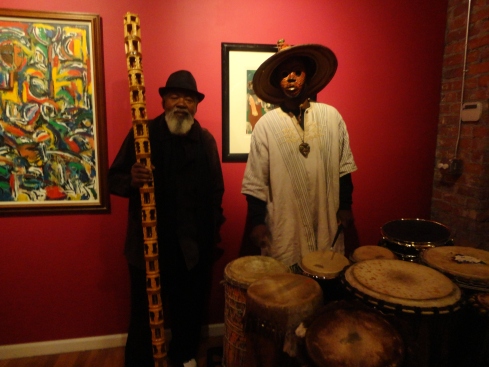 He now creates his magnificent works of art in Detroit, and has exhibited in the N’namdi Gallery of Contemporary Arts, the Kunstalle Gallery and the Michigan Fast Fest. Below, with Fast Fest runway models.

Philpot has exhibited in several major Detroit area shows, including this one, below, curated by Prof. Jocelyn Rainey, dean at Wayne County Community College:

In Detroit, he began to create simple walking sticks – with not so simple embellishments. 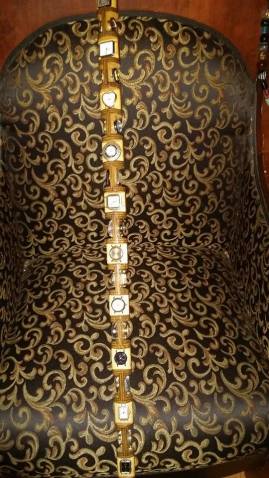 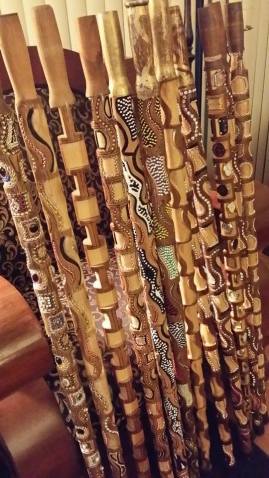 In 2015, Philpot was again asked by the U.S. State Department to be a part of the Arts in Embassies Program – this time, he was deeply honored that three of his staffs were purchased for the permanent collection of the U.S. Embassy in Swaziland.

Here in Detroit he engages with his new community, where there are many, many Trees Of Heaven 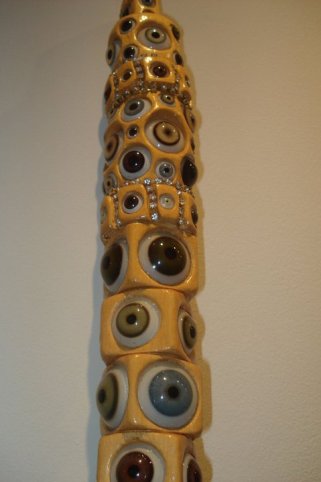 If anyone else should be credited, please let us know.

David Philpot may be contacted via the comment box, below: